When I arrived in Russia to take a job with The Moscow Times 10 years ago, Mikhail Khodorkovsky had just been arrested. Although I’d always taken an active interest in Russia and visited Moscow twice before, I didn’t fully grasp the significance of his detention until my first day at work in the newspaper’s newsroom.

The disbelief that Vladimir Putin would jail Russia’s richest man on tax evasion charges was still fresh among my new colleagues. Even greater disbelief would follow in subsequent months, as Khodorkovsky was banished to Siberia while his oil company Yukos was forced into bankruptcy and renationalized by one of Putin’s closest deputies.

Once again, the struggle between Putin and Khodorkovsky inspires disbelief. Less than a week ago, Khodorkovsky was just one of Russia’s 700,000 prisoners. And then, within hours of receiving a presidential pardon, he was spirited to Berlin on a private jet and reunited with his family at a five-star hotel at the Brandenburg Gate. A more dramatic reversal of fortunes is hardly imaginable.

The last time I saw Khodorkovsky was in a Moscow courtroom three years ago, when he and his business associate, Platon Lebedev, were facing a second set of charges that extended their prison terms until 2014. After it became public that prosecutors had launched a new case against the two men, a third show trial and conviction seemed inevitable. I tweeted: “You don’t need PhD in math to understand that number of Khodorkovsky’s prison terms = number of Putin’s presidential terms.”

Only two weeks later, I found out via Twitter that Khodorkovsky had landed in Berlin, a free man. It was a very strange feeling at first, since I’d moved to Berlin from Moscow in 2011 – in part to kick the adrenaline addiction of reporting from Russia but also to teach myself new forms of journalism. I was tired of the news always coming to me.

Of course Khodorkovsky’s arrival in the German capital was appropriate enough. Decisions taken in Berlin have had an outsized effect on Russia over the course of the past century: from the declaration of two wars and the smuggling of Vladimir Lenin into revolutionary St. Petersburg to the outbreak of the Cold War and the fall of the Berlin Wall. Only Germany, in its love-hate embrace with Russia, would have been capable of securing Khodorkovsky’s release.

It’s no coincidence that Khodorkovsky held his first press conference in 10 years at the Checkpoint Charlie Museum, just a few steps from the spot where Soviet and American tanks once faced each other down. I remember visiting the museum on my first trip to West Berlin in 1988, when there was still a U.S. Army checkpoint, a wall and Russian soldiers on the other side. 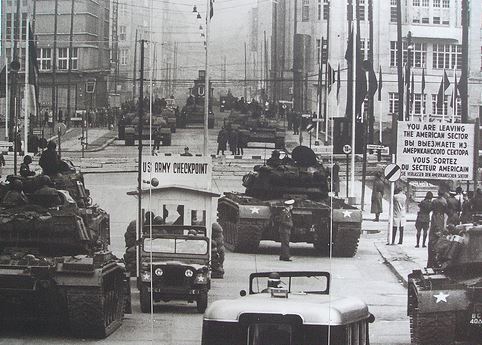 In the future, Khodorkovsky sees himself playing the same role for Putin’s Russia that West Berlin once played as a beacon of freedom for the communist bloc.

Whether you condemn him as an amoral oil tycoon or revere him as a freed political prisoner, Khodorkovsky has always thought big – and his problems began when he tried to show Putin who had the bigger cojones. Khodorkovsky didn’t land in jail because he was principled, but because he simply didn’t believe Putin would dare to lock him up.

A decade in prison has changed Khodorkovsky. He now views democratic change in Russia as his messianic mission, perhaps as redemption for the sins of the past. Russia has also changed. If ordinary Russians remember Khodorkovsky at all, it’s not with rancor, but with sympathy, even respect.

As far as Putin is concerned, Khodorkovsky could have spent the rest of his life in prison. Yet as other Kremlin rulers realized before him, keeping a prominent political prisoner inside the country is considerably more annoying than having a vocal dissident abroad.

In fact, I suspect that Putin originally wanted to chase Khodorkovsky into exile. He first imprisoned Lebedev to signal the seriousness of his intent and only went after Khodorkovsky when he failed to take the hint. The German diplomatic initiative provided Putin with an elegant solution to his biggest PR problem, allowing him to rid himself of a major irritant through a humanitarian gesture.

It’s stating the obvious to say that Putin freed Khodorkovsky because he doesn’t see him as a threat anymore. But that doesn’t mean Khodorkovsky is not a threat.

There’s no way Putin can be sure that this decision won’t come back to haunt him one day. Nobody can be sure until Khodorkovsky is allowed to go back to Russia.

I plan to be there with him when he returns.

What To Do With Toppled Statues? Russia Has A Fallen Monument Park

“The Russian experience should give some food for thought to those who are engaged in toppling statues in the U.S. these days.”

Fables of the Reconstruction

The Baddest Town in Russia

Face Without a Man

Based in Berlin and Moscow, I’ve reported from the former Soviet empire since 1996. I started working as National Public Radio’s Moscow correspondent in December 2016. Before that I contributed to Reuters, Slate, Bloomberg and The Moscow Times, among others.